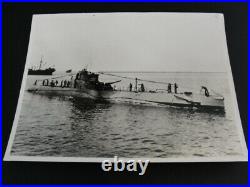 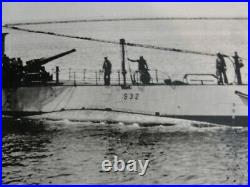 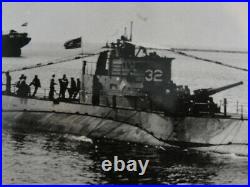 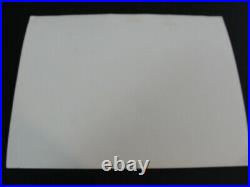 USS S-32 (SS-137) was an S-class submarine of the United States Navy. S-32 was laid down on 12 April 1918 by the Union Iron Works in San Francisco, California. She was launched on 11 January 1919 sponsored by Miss Margaret Tynan, and commissioned on 15 June 1922 with Lieutenant Edward E. Soon after commissioning, S-32, assigned to Submarine Division 17 and homeported at San Pedro, California, was ordered to New London, Connecticut. During the summer of 1923, she participated in cold weather exercises in the Aleutian Islands. In April 1924, she moved back to San Pedro, whence she operated into 1925. Early that year, however, her division was transferred to the Asiatic Fleet and its submarines shifted to Mare Island to prepare for the trans-Pacific crossing. On 15 April 1925, S-32 departed San Francisco, California, for the Philippines. She arrived at Cavite in mid-summer and through the winter of 1926 conducted local exercises in the Luzon area. That spring, she deployed to the China coast, conducting exercises both en route to and from her summer base, the former German base at Tsingtao. Overhaul followed her September return to the Philippines and completed an annual employment schedule which she maintained for the next six years. In 1932, Division 16 was ordered back to the eastern Pacific Ocean. S-32 departed Manila Bay on 2 May and, at the end of the month, arrived at Pearl Harbor, her homeport for the next five years. In June 1937, she sailed for the East Coast. In August, she reported for inactivation at Philadelphia, Pennsylvania, and, on 7 December, she was decommissioned and berthed at League Island. Within two years, however, World War II had begun in Europe. Hostilities soon extended across the Atlantic; and, in the summer of 1940, S-32 began activation. Recommissioned on 18 September 1940 and assigned to Division 52, S-32 conducted trials out of New London through November and, in December, proceeded to the Panama Canal Zone, whence she operated until April 1941. Through May, she patrolled and conducted training exercises out of the base at St. George, Bermuda, that had been acquired in the Destroyers for Bases Agreement of 2 September 1940. In late June, she resumed exercises out of New London. In September, she moved down to Philadelphia for an overhaul and, by December, she was back in Connecticut. With 1942, however, she received orders back to Panama. On 27 May, the submarine departed the Aleutians for the last time; and, on 6 June, she arrived at San Diego, where she provided training services for the remainder of World War II. Then designated for inactivation, she arrived at San Francisco on 13 September 1945 and was decommissioned at Mare Island on 19 October. A nice rare original photograph, measures 7 1/2″ x 9 5/8″ and is in very nice condition other than some corner creases from mounting and a small tear at top left……….. This item is in the category “Collectibles\Militaria\Militaria (Date Unknown)\Navy”. The seller is “theworldunhinged” and is located in this country: US. This item can be shipped worldwide.