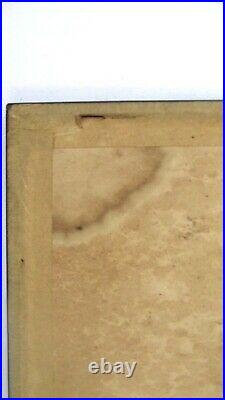 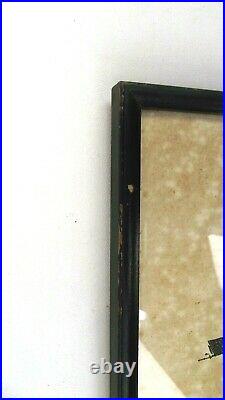 Etching USS Robison DDG-12 W Hand Written Note Fr Captain Cox To Admiral James. Size in frame is 10.75 wide x 8 7/8 height. The USS Robison was commissioned 12/61 and decommissioned 10/91. Robison earned seven battle stars for service off the Vietnamese coast. USS Robison (DDG-12), named for Rear Admiral Samuel Shelburne Robison, was a Charles F. Adams-class guided missile armed destroyer in the service of the United States Navy. Robison was laid down by Defoe Shipbuilding Company in Bay City, Michigan on 28 April 1959, launched on 27 April 1960 by Mrs. Sides, wife of the Commander-in-Chief, Pacific Fleet, and commissioned on 9 December 1961 at the Boston Naval Shipyard, Comdr. Hand written note states. With sincere appreciation from satisfied customers officers and men of U. Boston 7 December 1961. DV Cox Cdr USN PCO. Unsure if etching and print is original or print but. The print has condition issues and will probably need a professional to look at it. Bottom right has some water damage. I did not take glass off to clean underneath as it is very dirty. Frame has many bumps and scrapes. Please view photo’s and ask questions if needed. 1961 : The USS Robison DDG-12 was commissioned on 9 December, at the Boston Naval Shipyard, Comdr. 1962 – 1963: The USS Robison steamed for the west coast on 29 January, via the Panama Canal. On 1 March she received a message diverting her to Clipperton Island, to rescue 10 stranded seamen from the tuna boat Monarch, which had capsized 20 days earlier. Arriving at San Diego on 7 March, Robison underwent shakedown and then post-shakedown availability 14 June in San Francisco. Following completion of availability 31 July, Robison proceeded to Mare Island for ammunition, took on ASROC and Tartar missiles at Seal Beach, and then commenced 3 months of local training operations in San Diego. She got underway with Cruiser-Destroyer Flotilla 11 on 13 November for her first WestPac tour of duty. Upon completion of this deployment, Robison arrived San Diego 21 June 1963 for coastal operations. Calling at Pearl Harbor 23 November, she departed 2 days later in company with Midway (CVA-41). Upon detachment from Midway, she touched at Guam, and then escorted Hancock (CVA-19) eastward. Following fueling stops at Midway and Pearl Harbor, she arrived San Diego 19 December. 1964 – 1965: In January 1964 Robison entered Long Beach Naval Shipyard for it’s regular overhaul. After missile qualifications and refresher training, she steamed 14 August for her second WestPac deployment. Following her successful participation in modern naval warfare training exercises and calls at various Far Eastern ports, she departed Yokosuka 24 January 1965 and arrived San Diego 6 February. Local spring operations were followed by a midshipman training cruise from 10 June to 5 August. The latter month also brought a call at Portland, OR. And a visit, on the 24th, by the Chief of Naval Operations, Adm. In the fall she sharpened her ASW, AAW, and shore bombardment techniques during coastal operations. We work hard to make sure EVERY CUSTOMER IS 100% SATISFIED and we’ll try to resolve any problem or issue promptly. This item is in the category “Collectibles\Militaria\Militaria (Date Unknown)\Navy”. The seller is “warehousejoes” and is located in this country: US. This item can be shipped to United States.