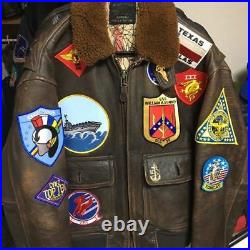 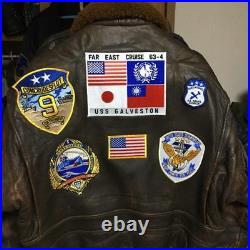 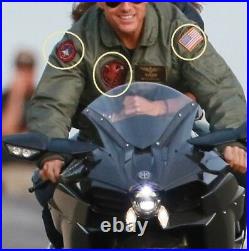 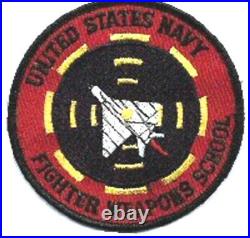 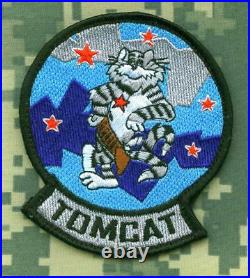 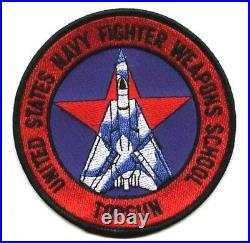 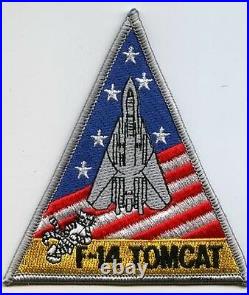 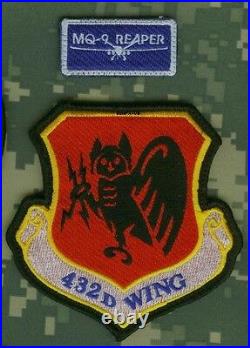 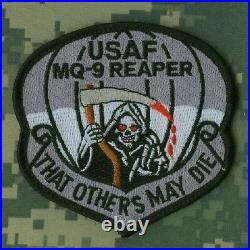 US NAVY As seen on Movie TOP GUN Pete Maverick Mitchell G-1 JACKET 17-PATCH Set. This is a very special US NAVY TOP GUN FIGHTER SCHOOL As seen on Movie TOP GUN Pete Maverick Mitchell G-1 JACKET 17-PATCH Set, you will receive seventeen (17) Patch Set as shown in the first photo (actual patches you are receiving are shown). The 17-patch set contens the following patches. Three patches on the R-front chest, Two patches on the R-upper arm, Three patches on the L-front chest One patch on the L-shoulder, Two patches on the L-upper arm, Five patches on the back. TOP GUN was formerly known officially as the United States Navy Fighter Weapons School, and was established on March 3, 1969 at NAS Miramar, California after a United States Navy report recommended that a graduate-level school be established to train Fleet fighter pilots in air combat tactics to counter the relatively poor air combat performance being experienced by Navy aircrews over Vietnam. The school initially operated the A-4 Skyhawk and F-5 Freedom Fighter to instruct F-4 Phantom II aircrews, including the first US aces of the Vietnam War, Randy Cunningham and Willie Driscoll. The 1970s and 1980s brought with them the introduction of the F-14 Tomcat and the F/A-18 Hornet as the primary Fleet fighter aircraft flown by students, while TOP GUN instructors retained their A-4s and F-5s, but also added the F-16 Fighting Falcon to better simulate the threat presented by the Soviet Union’s new 4th generation MiG-29’Fulcrum’ and Su-27’Flanker’ fighters. During the 1990s, the TOP GUN syllabus was modified to include more emphasis on the air-to-ground strike mission as a result of the expanding multi-mission tasking of the F-14 and F/A-18. In addition, TOP GUN retired their F-4s, A-4s, and F-5s in favor of F-16s and F/A-18s. In 1996, the transfer of NAS Miramar to the Marine Corps was coupled with the incorporation of TOP GUN into the Naval Strike and Air Warfare Center at NAS Fallon, Nevada. TOP GUN instructors currently fly the F/A-18 Hornet and the F-16 Falcon. TOP GUN was made famous in popular culture by the 1986 release of the motion picture Top Gun. The first A-4s to enter service with the United States Navy were designated A4D-1 (later A-4A) and went to Attack Squadron SEVEN TWO (VA-72) Blue Hawks at Naval Air Station (NAS) Quonset Point in Rhode Island on September 26th 1956. The first Marine Corps outfit to fly A-4As was Marine Attack Squadron TWO TWO FOUR (VMA-224) Bengals at Marine Corps Air Station (MCAS) El Toro in California. The Super Fox While A-4Fs continued to serve with Naval and Marine Corps Reserve squadrons, they were gradually being replaced and demand for their services at the Navys Fighter Weapons School (TOP GUN) and elsewhere as adversary aircraft was on the rise. Adversary pilots had been imitating MiGs while flying Scooters for many years. The Super Fox was a triumph of fiscal responsibility. These A-4Fs were equipped with the beefier J52-P408 engines, stripped of all extra weight, and turned into Hot Rod Tinker Toys. The jets were far less expensive to operate and maintain than the Phantoms and Tomcats whose tails they were regularly waxing during dissimilar air combat training (DACT). VF-43 Challengers, VF-45 Blackbirds, VF-101 Grim Reapers, VF-126 Bandits, VFC-12 Fighting Omars, VFC-13 Saints, and many more Composite squadrons used A-4Fs and some A-4Ms as stand-ins for MiGs. They will make a great addition to your Air Force PATCH collection. You find only US Made items here, with. FREE 30-day No-Question return. We do not compete price with cheap import copies. Watch out for cheap import copies with cut-throat price. We beat cheap copies with Original design, US-Made Quality and customer services. Once a customer, a LIFETIME of services. The item “As seen on Movie TOP GUN Pete Maverick Mitchell G-1 JACKET 17-PATCH Set” is in sale since Thursday, November 22, 2018. This item is in the category “Collectibles\Militaria\Current Militaria (2001-Now)\Original Items\Patches\Navy”. The seller is “militarypatch” and is located in Kandahar Polo Club. This item can be shipped worldwide.