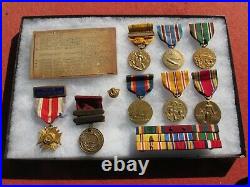 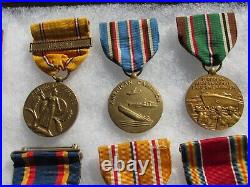 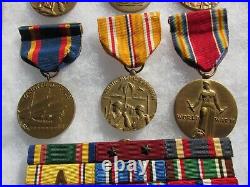 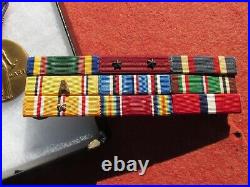 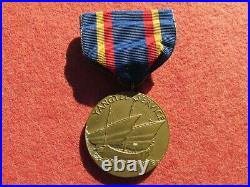 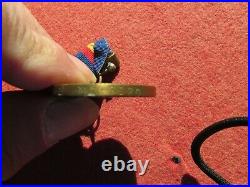 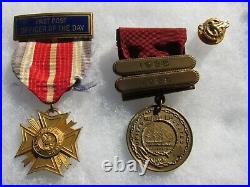 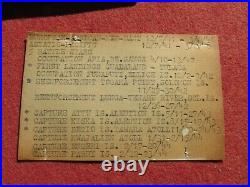 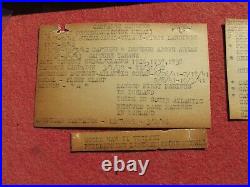 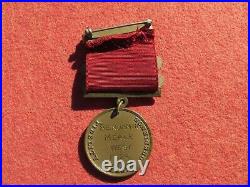 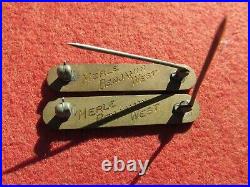 Named Pre WWII / WWII U. Navy Yangtze Service Medal Group. The group is comprised of the seven federal medals and one VFW medal of Merle Benjamin West, who served in the United States Navy from the 1920s through the Second World War. These medals are comprised of Wests named Navy Good Conduct Medal with full wrap brooch and officially hand engraved on four lines Benjamin Merle West 1926. The medal has two bars for subsequent awards, one officially engraved 1935 and the other officially engraved 1938. Both are officially hand engraved on the reverse Merle Benjamin West, indicating that Wests first and middle names were switched the medal planchet. The group further includes the U. Navy Yangtze Service Medal, full wrap brooch, with the edge numbered M. 3120; American Defense Medal, slot brooch, with Navy Fleet bar; American Campaign Medal, crimp brooch; European Campaign Medal, crimp brooch; Pacific Campaign Medal, crimp brooch; and the WWII Victory Medal, slot brooch. The group also includes a Veterans of Foreign Wars medal with an enamel Past Post Officer of the Day suspension bar. Also included is a 9 pace ribbon rack, circa 1980s, which displays the ribbons for the seven federal medals as well as the Navy Commendation Ribbon (which had no medal) and the ribbon for the Philippine Liberation Medal which West likely never actually received. The ribbon for the Yangtze Service Medal has had fading of the yellow stripes to an almost white color. The group includes old index cards on which are typed Wests service record. The medals are all in excellent condition. Research has found that Merle Benjamin West was born 30 June 1901 and died 25 February 1989. His enlisted service number was 385 09 42, and his CWO2 number was 342617. He received his commission on 18 January 1944, with seniority from 15 December 1943. His original enlistment date was 8 April, 1919, and he transferred to the Fleet Reserve on 10 March 1939, then being Reactivated on 9 May 1941. At that time he joined the crew of the attack transport USS Heywood (AP-12 / APA-6) on 27 May 1941. He spent most, if not all, of WWII aboard the Heywood, which was involved in patrols in the Atlantic and the landing of U. Marines in Iceland, then moving to the Pacific where it was involved in combat operations which included Guadalcanal. The Heywod received seven battle stars for its actions in World War II. Merle West retired on 1 October 1948. Item location large wood cabinet 5th drawer left side. The item “Named Pre WWII / WWII U. S. Navy Yangtze Service Medal Group” is in sale since Friday, February 5, 2021. This item is in the category “Collectibles\Militaria\WW II (1939-45)\Original Period Items\United States\Medals & Ribbons”. The seller is “steviewonder2002″ and is located in Santa Rosa, California. This item can be shipped worldwide.