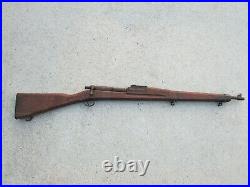 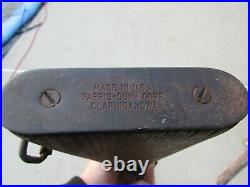 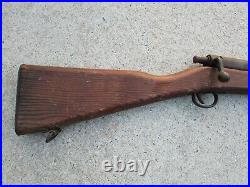 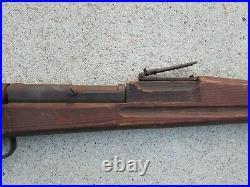 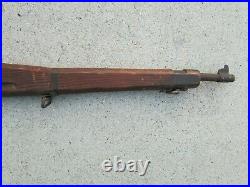 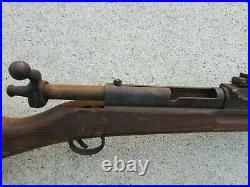 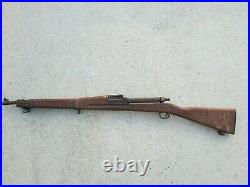 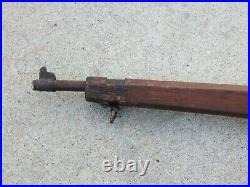 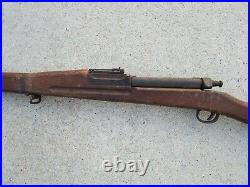 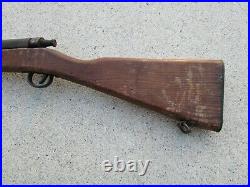 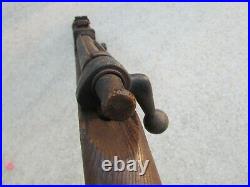 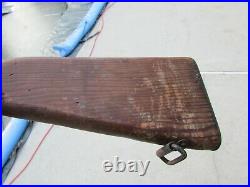 Original Item: Only One Available. This is an excellent example of WWII production Paris-Dunn Corp drill rifle. The wood stock is in good condition, the replica bolt cycles correctly, and the trigger dry fires. The Parris-Dunn Corporation was founded by William G. Dunn and Cecil L Parris when they formed a business partnership in 1937. Each of these men brought unique contributions to this partnership. Although Dunn had no formal technical training he, like many great inventors, could see the interrelationships that existed between different mechanical devices and could modify or combine them to solve problems. Parris had a background as sales manager for the Kari-Kleen company of Souix City, Iowa and was a talented merchandiser. Initially Parris was the President of the corporation and Dunn the Vice-president but during the war years their positions reversed. In 1917 he formed the Dunn Counterbalance Company operating out of the back of his hardware store. He eventually built a factory on South 15th Street in Clarinda and the name was changed to the. He was a very talented inventor and eventually held patents for 75 different mechanical devices, many of which were related to the early automobile and aircraft industry. In 1934 he developed a wind driven generator that was designed for farm use. His primary invention was a device to control the speed of the propeller on this device. In 1936 he formed a partnership with Cecil Parris in order to better promote his generator business. When WWII broke out in 1941 their wind generator business was declared nonessential and they were only allowed to make repair parts for the units already in use. There was a severe shortage of military firearms at the start of the war and they were approached by US Army Ordnance to produce a non-firing training rifle. Shortly after, the US Navy also expressed interest in this project but they wanted some slight modifications in their model. In October of 1942 the Army contract was completed and in November they finished the first Navy contract. In January of 1943 the Navy let contract NORD 808 for 110,000 additional training rifles and in June that contract was completed. By the time of the second contract, Parris-Dunn could no longer get walnut wood for the stocks as all of it was going to arsenals that were making functional military rifles. They had to start using a cheaper grade of wood during the last contract which lowered the unit price. Prior to the start of the military contracts Parris-Dunn recognized that they did not have sufficient personnel to produce the required number of training rifles in a short period of time. They put together another organization called Parris-Dunn Associates to undertake this important project. I have a document that contains the following: C. Davidson, Copartners, doing business as Parris-Dunn Associates. At this time I have not been able to identify H. They immediately expanded into all of the available building space in the area and hired more employees. This number grew to 250 during the peak of their production. They sub-contracted much of the work to 14 different businesses. The wooden stocks and sights were manufactured at their Clarinda plant and all of the assembly and finishing was also done there. They had that capacity to produce over 3000 training rifles a day. On July 23, 1943 Parris-Dunn Associates received the coveted Army-Navy E Production Award. After the completion of their military contracts they continue to produce 200,000 of a civilian model for drill corps, schools and ROTC programs. The civilian model was essentially the same as the military models but had different markings. This price included a plastic bayonet and scabbard. Nothing is known concerning the disposition of the Army training rifles. The Parris-Dunn Training Rifle is not a very accurate replica of the 1903 Springfield Rifle. It has a similar profile but is thinner in cross section and 3 pounds lighter in weight. The receiver, bolt and trigger mechanism are simple and crude by comparison to the Springfield. It has the general feel and appearance of a toy. It was reported that these training rifles were not very popular with soldiers and sailors that were required to use them during basic training. It must be noted that there were no other alternatives available at the time. Nice original period piece. Please look at the pictures and please ask any questions. Lots of other stuff so check out my. If you haven’t already; add me to your. The item “RARE US WWII WW2 Original Parris-Dunn Corp 1903 Mark I USN Training Rifle” is in sale since Thursday, January 14, 2021. This item is in the category “Collectibles\Militaria\WW II (1939-45)\Original Period Items\United States\Field Gear, Equipment”. The seller is “realpro102″ and is located in Philadelphia, Pennsylvania. This item can be shipped to United States, Canada, United Kingdom, Denmark, Romania, Slovakia, Bulgaria, Czech republic, Finland, Hungary, Latvia, Lithuania, Malta, Estonia, Australia, Greece, Portugal, Cyprus, Slovenia, Japan, China, Sweden, South Korea, Indonesia, Taiwan, South africa, Thailand, Belgium, France, Hong Kong, Ireland, Netherlands, Poland, Spain, Italy, Germany, Austria, Bahamas, Israel, Mexico, New Zealand, Philippines, Singapore, Switzerland, Norway, Saudi arabia, Ukraine, United arab emirates, Qatar, Kuwait, Bahrain, Croatia, Malaysia, Brazil, Chile, Colombia, Costa rica, Panama, Trinidad and tobago, Guatemala, Honduras, Jamaica, Antigua and barbuda, Aruba, Belize, Dominica, Grenada, Saint kitts and nevis, Saint lucia, Montserrat, Turks and caicos islands, Barbados, Bangladesh, Bermuda, Brunei darussalam, Bolivia, Ecuador, Egypt, French guiana, Guernsey, Gibraltar, Guadeloupe, Iceland, Jersey, Jordan, Cambodia, Cayman islands, Liechtenstein, Sri lanka, Luxembourg, Monaco, Macao, Martinique, Maldives, Nicaragua, Oman, Peru, Pakistan, Paraguay, Reunion, Viet nam, Uruguay.