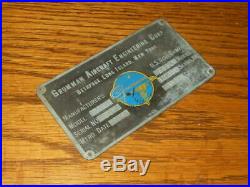 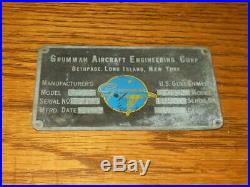 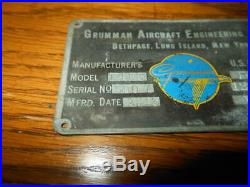 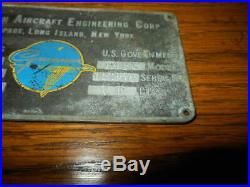 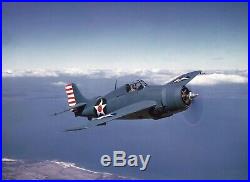 Manufactured F4F-3 Wildcat Main Data Plate, Serial Number 12256. Removed from a downed Wildcat by a US Veteran, this tag was the main data tag located on the fuselage. The Grumman F4F Wildcat was an American carrier-based fighter that began service with both the United States Navy and the British Royal Navy (as the Martlet) in 1940. Although first used in combat by the British in Europe, the Wildcat was the only United States Navy or Marine fighter in World War II 194142 in the Pacific Theater besides the brief appearance of the F2A Buffalo. With a top speed of 318 mph (512 km/h), the Wildcat was outperformed by the more nimble 331 mph (533 km/h) Mitsubishi Zero, but its ruggedness and tactics such as the Thach Weave resulted in an air combat kill-to-loss ratio of 5.9:1 in 1942 and 6.9:1 for the entire war. Lessons learned from the Wildcat were applied to the faster F6F Hellcat which could outperform the Zero on its own terms. The Wildcat continued to be built throughout the remainder of the war to serve on escort carriers, where larger and heavier fighters could not be used. Made of aluminum, this is an EXTREMELY RARE piece and was taken off the aircraft by a US veteran in the late stages of the war. Though some of the paint has faded slightly due to wear and age. All markings are very legible. MANUFACTURE’S US GOVERNMENT. DATE 2.43 VF CLASS. It mounted directly to fuselage, and was from 1 of only 300 Grumman built F4F’s ever produced! Would make a SUPERB addition to any collection, display, or restoration project! General Motors / Eastern Aircraft produced 5,280 FM variants of the Wildcat. Grumman’s Wildcat production ceased in early 1943 to make way for the newer F6F Hellcat, but General Motors continued producing Wildcats for both US Navy and Fleet Air Arm use. Late in the war, the Wildcat was obsolescent as a front-line fighter compared to the faster (380 mph/610 km/h) F6F Hellcat or much faster (446 mph/718 km/h) F4U Corsair. However, they were adequate for small escort carriers against submarine and shore threats. These relatively modest ships carried only two types of aircraft (along with the GM-built Avengers). The Wildcat’s lower landing speed and ability to take off without a catapult made it more suitable for shorter flight decks. [19] At first, GM produced the FM-1, identical to the F4F-4, but reduced the number of gun to four, and added wing racks for two 250 lb (110 kg) bombs or six rockets. Production later switched to the improved FM-2 (based on Grumman’s XF4F-8 prototype) optimized for small-carrier operations, with a more powerful engine the 1,350 hp (1,010 kW) Wright R-1820-56, and a taller tail to cope with the torque. Tasked with supporting ground forces off Leyte, sorely under-armed planes from escort carriers such as Gambier Bay in the “Taffy” task groups found themselves up against a major surface fleet which they helped turn back in the Battle off Samar. TERMS OF SALE. Most of my items are vintage, and as such are AS-IS, so you must therefore expect a degree of wear due to age and/or usage. ABOUT ME. Although my passion is the Me109, I do offer many other German Aircraft Fw190, Me262, etc. , as well as USAF and Japanese items. Occasionally I do offer many non-vintage items such as prints and art relating to the time period. Use is solely based on my authorization only. The item “WW2 US Navy Aircraft MAIN FUSELAGE DATA PLATE F4F-3 Wildcat RARE” is in sale since Friday, April 17, 2020. This item is in the category “Collectibles\Militaria\WW II (1939-45)\Original Period Items\United States\Other US WWII Original Items”. The seller is “messerschmitt_109″ and is located in Malibu, California. This item can be shipped worldwide.