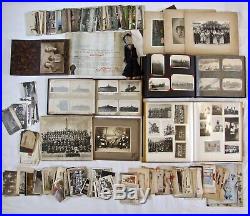 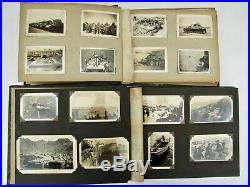 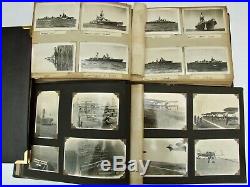 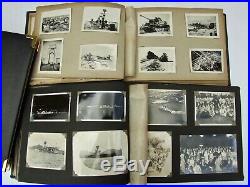 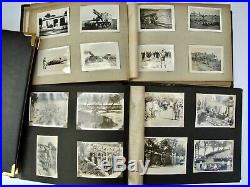 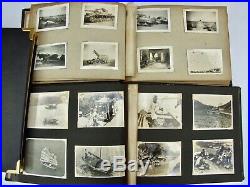 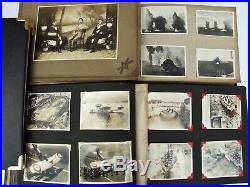 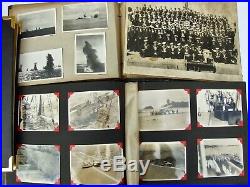 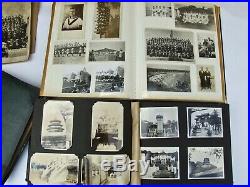 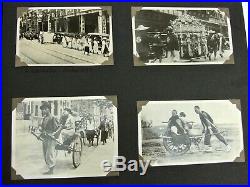 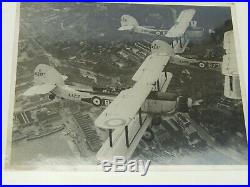 Listing updated 20th August with new photographs showing some of the album contents. A Large WW2 Era (and later) Royal British Navy Photograph and Ephemera Collection. The active service, peacetime and civilian archive of Able Seaman Sydney Smith. A large collection of original photographs, period reproduction photographs, period commercial / souvenir photos, vintage postcards, photo postcards, notes, letters, Royal Navy ephemera, family greetings cards and miscellaneous family ephemera from the life and times of Able Seaman Sydney Smith. This is a substantial collection that I would prefer to sell as one lot, and not split up. It provides a fascinating, insightful archive into the social history of one man’s journey with the British Royal Navy, with material relating to peacetime tours, some active service, civilian/family life, retirement and finally old age. There is too much to list and photograph. The first image shows everything that is included in the lot. The other shots detail some of the more interesting images contained within the albums… Therefore here is a brief rundown of what I’ve spotted. This collection is strong on battleship imagery. Named battleships include: HMS Catterick; Vittorio Venetto (Italy); Cruiser Luigo Cadona; Eugenio di Savoia; Destroyer Grecole; Italia; HMS Terror and One Destroyer. There are some good and interesting images of battleships at. Oda (Norway) and dated 1932. Port Said, The Suez Canal. Middle and Far East. There are also some shots of famous. (Peking), Temple of Heaven and other landmarks within to include the famous arched bridge and. Superb original diplomatic shot. Showing Sidney Smith and another member of the Navy sitting with a high-ranking. (together with hand-written notes to the reverse, with language typical of the period). There are also good images of aircraft… Including a couple of splendid photographs if biplane formation flying over, I think, Hong Kong harbour. There are also shots of the same planes that have crash-landed, either on the beach or into the ocean, with images of wreckage being pulled from the water by the Naval rescue teams dropped into the water in their rescue boats. Wei Hai Wei is represented. Salonica is also featured with a couple of interesting, early images showing a “Base Troops Cups Semi Final Football Match” dated 1917-18 as well as shots of the White Tower Salonica Harbour. There are also some images of conflict on land: in the desert and in and around cities and towns, with a few graphic images showing the casualties of war. Other photos depict everyday civilian life….. Again with a good, small collection focussing on the Far East and China to include street vendors, children, Junks sailing in the ocean and so on. Nearly all of the photographs within the albums are held in place with corner pieces and therefore are not stuck down flat. Some of the larger photographs, outside of the albums are stuck flat to backing boards. In total there are three albums. One is full and contains earlier imagery. The second album is approx three quarters full and the third and largest album approximately half full. Most of the loose material, as pictured, is’ephemera’ and is not Navy Specific. Whilst there are a good number of original photos it should be noted that a number of the pictures are commercially available images from the period and so are not truly original first photographs, however all are old……. And nearly everything within the albums is’interesting’, including some fine and rare original shots. Original / official HMS Hermes Christmas Card. Official HMS Hermes Invitation to Dinners / Dance (dated 1935). HMS Hermes Christmas Menu Cards (dated 1934). A period Royal Navy Doll (worn/tired). A vintage 1922 Neptunus Rex Certificate. There are also many, many images of Sydney Smith (portraits and group shots) whilst posted, on leave, at home and whilst at sea. These are often with notes verso to loved ones and family. An interesting hand-written letter on embossed/crested paper, which details Sydney Smith’s request for extraction from service, with associated reasoning, whilst posted at WeiHaiWei. Extensive images of broader family and civilian life post-service, children, marriage and into retirement. In mixed condition, but generally fair-good. Some of the larger images stuck down and with some soiling or discolouration. Images in albums generally good and fairly well preserved, although in one album some of the images have taken on the textured pattern of the paper which separates each page. Royal Navy doll with associated wear and tear. Postcards, letters and greetings cards with associated wear, dog-earing etc. All items are packed with care, to a high standard and sent via tracked and signed for courier. Arrived on time and as described. If I could leave a million stars, I would. SUPERB: accurately described, well packed and sent quickly – highly recommended! IF THERE WAS A SCORE HIGHER THAN 5 STARS THIS EBAYER WOULD DESERVE IT A++++. Superb communication, very honest and helpful. Many thanks for looking! The item “WW2 BRITISH ROYAL NAVY PHOTOGRAPH ARCHIVE EPHEMERA HONG KONG CHINA MALTA NORWAY” is in sale since Monday, August 5, 2019. This item is in the category “Collectables\Militaria\World War II (1939-1945)\Photographs”. The seller is “the_thought_fox” and is located in Cheltenham, Gloucestershire. This item can be shipped to United Kingdom, Austria, Belgium, Bulgaria, Croatia, Cyprus, Czech republic, Denmark, Estonia, Finland, France, Germany, Greece, Hungary, Ireland, Italy, Latvia, Lithuania, Luxembourg, Malta, Netherlands, Poland, Portugal, Slovakia, Slovenia, Spain, Sweden, Australia, United States, Bahrain, Canada, Brazil, Japan, New Zealand, China, Israel, Hong Kong, Norway, Indonesia, Malaysia, Mexico, Singapore, South Korea, Switzerland, Taiwan, Thailand, Bangladesh, Bermuda, Bolivia, Barbados, Brunei darussalam, Cayman islands, Ecuador, Egypt, Guernsey, Gibraltar, Guadeloupe, French guiana, Iceland, Jersey, Jordan, Cambodia, Liechtenstein, Sri lanka, Macao, Monaco, Maldives, Martinique, Nicaragua, Oman, Pakistan, Peru, Paraguay, Reunion, Saudi arabia, South africa, United arab emirates, Bahamas, Colombia, Jamaica, Kuwait, Panama, Qatar, Uruguay, Viet nam.