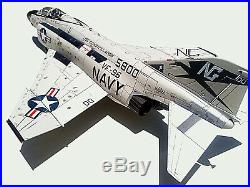 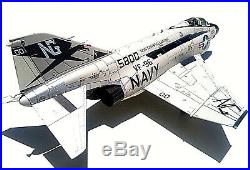 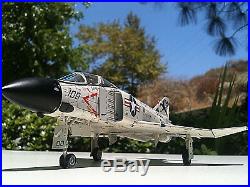 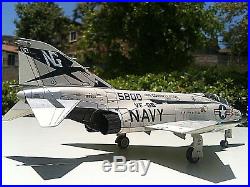 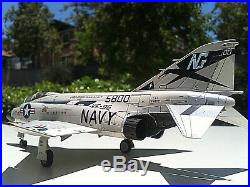 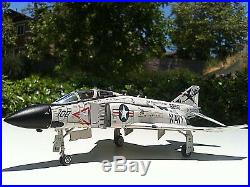 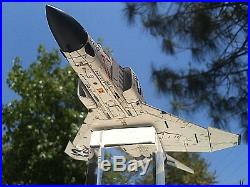 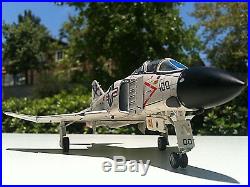 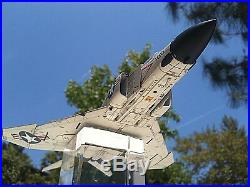 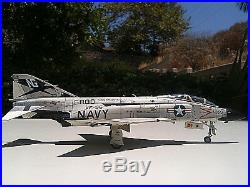 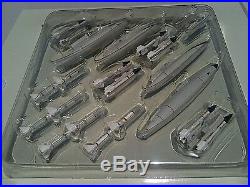 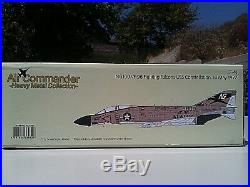 This listing is for a new Air Commander Heavy Metal Collection AC 1007 Mc Donnell Douglas F-4J Phantom II Die-cast Model USN VF-96 Fighting Falcon, NG100 Showtime 100, Randy Cunningham, USS Constellation, Vietnam, May 10th 1972. This model was released in June 2017 with only 1,000 distributed world-wide. Scale: 1/72 Length: 9.75″ Width: 6.25″ Note: Model in the photos belongs to my collection. For sale models are sealed in boxes. May 10, 1972 Lt. Randy “Duke” Cunningham and his RIO, Lt. (JG) Willie “Irish” Driscoll from the USS Constellation’s Fighter Squadron VF-96 “the Fighting Falcons” departed in their F-4J Phantom II “Showtime”. Their job was to bomb a rail yard and then provide cover for A-7’s on the same mission. During the mission Mig-17s arrived and so began the battle. Cunningham immediately found himself with a Mig-17 at his 6. Showtime broke sharply and the Mig overshot the F-4 and Driscoll was now behind the Mig and destroyed it with a Sidewinder missile. Now able to concentrate on other planes Cunningham saw his XO with 3 Mig-17s closing in on him. Duke told the XO to break so he could get a shot at the Mig the XO obviously didn’t see. The XO thought Cunningham was talking about the other 2 Migs that he knew about so he ignored the advice and continued on. Cunningham made one more transmission warning the XO if he didn’t break now he was going to die. This time the XO broke giving Cunningham a clear shot and Mig number 2 was dealt with. Seemingly out numbered the F-4s decided it was time to run and fight another day so they sped off towards the carrier. As they approach the coast Cunningham found himself flying head on with a Mig-17. Forgetting that the Mig had nose guns Cunningham committed mistake number one, he continued to fly straight at the Mig. It wasn’t until the nose of the Mig lit up from gun fire that Driscoll realized his error and immediately began to climb. Looking over he saw the Mig pilot had done the same thing so he decided to pull over the top and committed mistake number 2 because this put Showtime in front of the Mig again and gave the pilot a clear shot. Miraculously the first shots missed and Cunningham rolled in another direction. This cat and mouse went on for what seemed forever with each pilot gaining and losing the advantage several time. The opportunity to break off the engagement came but Cunningham’s ego got in the way so he became even more determined to get the Mig rather than go back to the carrier and tell his buddies he couldn’t take out a Mig. When Cunningham told the RIO that they were going to get this Mig, the reply was I’m right behind you! Finally with the Mig once more on his tail Duke cut the throttle, slammed on the speed brakes (Top Gun style) and as the Mig went speeding past he fired a missile that finally ended the duel. Just as they thought they were home free a SAM took them out forcing the crew to bail out. The two men lost sight of each other and Cunningham landed in the ocean and was attacked by a gun boat but he managed to elude them and was later picked up by a rescue helicopter that also rescued Driscoll. The two became the first crew to shoot down 3 aircraft in one day using only missiles and combined with 3 previous kills it also made them Vietnam Aces. McDonnell Douglas F-4 Phantom II Designed as a fleet defense fighter for the US Navy, the F-4 Phantom was first flown on May 27, 1958. This twin-engine, long-range all-weather fighter/bomber proved highly adaptable and served in the Marine Corps and the US Air Force as well as in the Navy. During the Vietnam War, it was the principal air superiority fighter for the Navy and the Air Force and was also used for reconnaissance and ground attack. The Phantom continued to serve well into the 1970s and 1980s and even flew missions during the first Gulf War. Finally phased out by the F-14, F-16 and F/A-18, the Phantom was retired in 1996. Air Commander die-cast airplanes feature. Die-cast metal construction with some plastic components. Realistic panel lines, antennas, access panels and surface details. Pad printed markings and placards that won’t fade or peel like decals. Opening canopies, revealing detailed cockpit interiors. Selected moveable control surfaces. Interchangeable extended/retracted landing gears. Presentation stand to display the aircraft “in flight”. Detailed removable pilot and crew figures. Authentic detachable ordnance loads complete with placards. Accurately detailed underside with concealed screw-heads. Many limited editions with numbered certificate of authenticity. The item “Air Commander F-4J Phantom II USN VF-96, NG100 Showtime 100, Vietnam, 1972 1/72″ is in sale since Wednesday, July 18, 2018. This item is in the category “Toys & Hobbies\Diecast & Toy Vehicles\Aircraft & Spacecraft\Contemporary Manufacture”. The seller is “warclouds” and is located in Canoga Park, California. This item can be shipped to United States.