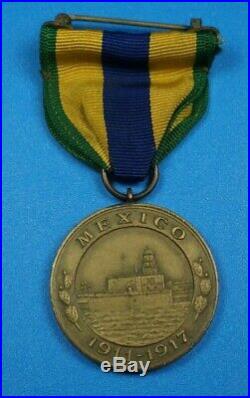 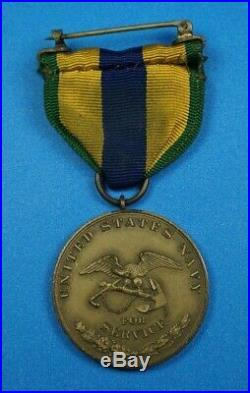 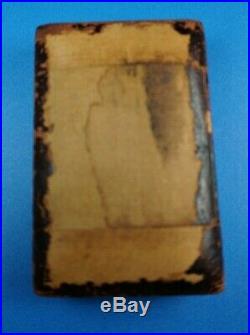 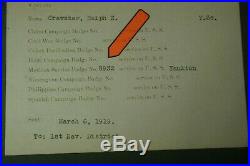 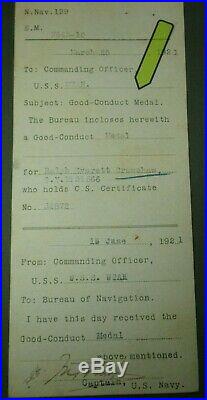 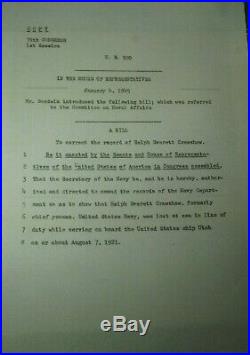 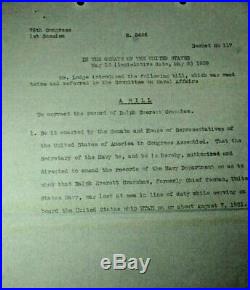 This is a United States Navy, plain numbered (8932), Mexican Service medal. It has the original split wrapped, open C catch brooch and original ribbon. The ribbon is in good condition. The planchet is in very good condition, and there are no edge knocks. The numbers are well impressed, very clear and easy to read. The medal comes with the original Bailey Banks & Biddle Co. Philadelphia logo box of issue, but the box shows age and wear and the dark brown color is faded and worn from the box. The box does open and close properly. This specific medal was awarded and issued to Chief Yeoman Ralph Everett Crawshaw. Crawshaw was born in Roxbury, Massachusetts, on October 23, 1889, and needless to say, had a very interesting naval career, ending in his premature death at sea. He first joined the US Navy on April 21, 1909, at Boston, MA. On October 22, 1912, he was honorably discharged from the USS Tennessee. The next day he reenlisted as a Seaman, at Boston, MA. On July 23, 1916, he was honorably discharged as Yeoman 2nd Class, while attached to the USS Birmingham. The next day, retaining his rank, he reenlisted at Long Island, NY. In July of 1920, he extended his enlistment for four years. After a hasty trail board, he was found guilty and placed into his quarters in confinement, under marine guard. The next day, August 7, 1921, he was found missing and his quarters porthole was left opened. Much later, his wife, a Navy nurse, was advised by letter that because of her husband’s conviction, he had become mentally deranged and squeezed through his porthole, and fell to his death at sea. Of course, because of this blemish on Chief Crawshaw’s records, his wife (and daughter) could not receive any compensation from his death. She asked and was granted permission to check the measurements of the porthole, and discovered that a young child could not squeeze through, let alone a full grown man. This was the first inconsistent fact, which started her on a quest to correct this injustice. She wrote letters to her Congressman, her Senator, the President, the Navy brass, the Secretary of the Navy, and even had the American Legion write letters in her husband’s behalf. Eventually his body was found two weeks later by the HMS Maidstone, on England’s Atlantic coast. But because they could not identify his decomposed body, he was buried as an “Unknown”. Political pressure was brought, but the Navy would not budge, and changed the story by claiming that Crawshaw was drunk and under the influence of drugs, and fell overboard. They later changed their mind, when a shipmate of Crawshaw, some years later, confirmed that the post office was raided by other seaman, during Crawshaw’s illness, and that he was not to blame. The 79th Congress, passed H. 900 bill, that confirmed that Chief Yeoman Crawshaw lost his life at sea, in the line of duty. Next, the Senate passed S. 2426, again confirming the Chief Yeoman Crawshaw lost his life at sea, in the line of duty. In August, 1951, President Truman signed the bill, and Chief Yeoman Crawshaw’s name was finally inscribed in the US Navy’s Roll of Honor. For her efforts, she was duly compensated for her husband’s untimely in-service death. I will provide two copies from the National Archives, confirming his award and issuance of this medal, by number, while aboard the USS Yankton (at one time owned by Sarah Bernhardt); a copy of his Good Conduct award (whereabouts of this medal is unknown); a copy of HR Bill 900 and a copy of S Bill 2426; and a copy of the Portsmouth Herald article dated August 22, 1951. I should also note that he was eligible for the WW1 Victory medal, however, if awarded and issued, whereabouts of that medal is unknown. There are about 275 pages of National Archival research available on Chief Yeoman Crawshaw. The item “Numbered (8932) US Navy Mexican Service Medal to Chief Yeoman-USS Yankton” is in sale since Sunday, May 5, 2019. This item is in the category “Collectibles\Militaria\WW I (1914-18)\Original Period Items\United States\Medals, Pins & Ribbons”. The seller is “xvpd311″ and is located in Vallejo, California. This item can be shipped to United States.